When the touring show Beatles vs. Stones – A Musical Showdown comes to the Hemmens Cultural Center on September 23, the St. Charles East High School String Quartet will have the privilege of joining the professional musicians on stage to add some orchestral texture to the evening. The show pits Rolling Stones tribute band Satisfaction against rival Brit boys Abbey Road in an all-out musical showdown for rock dominance. The string quartet will perform seven songs with the bands.

The details: Two of the greatest bands of all time face off in a high-energy, adrenaline-pumping musical showdown. The Fab Four, represented by tribute band Abbey Road will engage in a barrage of hits against premier Rolling Stones tribute band Satisfaction. Beatles vs. Stones – A Musical Showdown comes to The Hemmens Cultural Center on Monday, September 23 at 7:30 pm. Tickets are $35-$75 and may be purchased by phone at 847.931.5900, at the Theatre Box Office or online at www.hemmens.org. The Hemmens Cultural Center is located at 45 Symphony Way, Elgin, IL 60120. The show is appropriate for all ages.

The show:  The two greatest rock ‘n’ roll bands of all time face off in Beatles vs. Stones – A Musical Showdown. Taking the side of the Fab Four is Abbey Road, one of the nation’s top Beatles tribute bands. With brilliant musicianship and authentic costumes and gear, Abbey Road plays beloved songs spanning the Beatles’ career. They engage in a “showdown” of the hits with Stones tribute band Satisfaction – The International Rolling Stones Show, who offer a faithful rendition of the music and style of Mick Jagger, Keith Richards and the bad boys of the British Invasion. The production includes multimedia, period costumes and vintage instruments. It has toured for years, with a critic for the Los Angeles Times at one point declaring: “this is the most unique tribute show in decades.” The Elgin show is part of a 125 city tour of the U.S., Canada and Australia.

The string quartet: St. Charles East High School seniors Ayu Seiya, Lasey Emmerich, Storey Childs and Trudie Childs will join the bands for the songs “Eleanor Rigby,” “A Day in the Life,”‘Yesterday,” “Hello Goodbye,” “Hey Jude,” “As Tears Go By,” and “Ruby Tuesday.” In addition to performing with the Elgin Youth Symphony Orchestra and the Midwest Young Artist Conservatory, members have competed at local and regional solo and ensemble festivals where they have consistently received superior ratings.

How the “Beatles” and “Stones” connection was started: The producers of Beatles vs. Stones approached St. Charles East High School Orchestra Director Daniel Beder looking for a talented ensemble of high school students which could hold their own with a rock band in front of an audience. The show commonly reaches out to local high school orchestras, making donations to their school music programs in exchange for student participation. 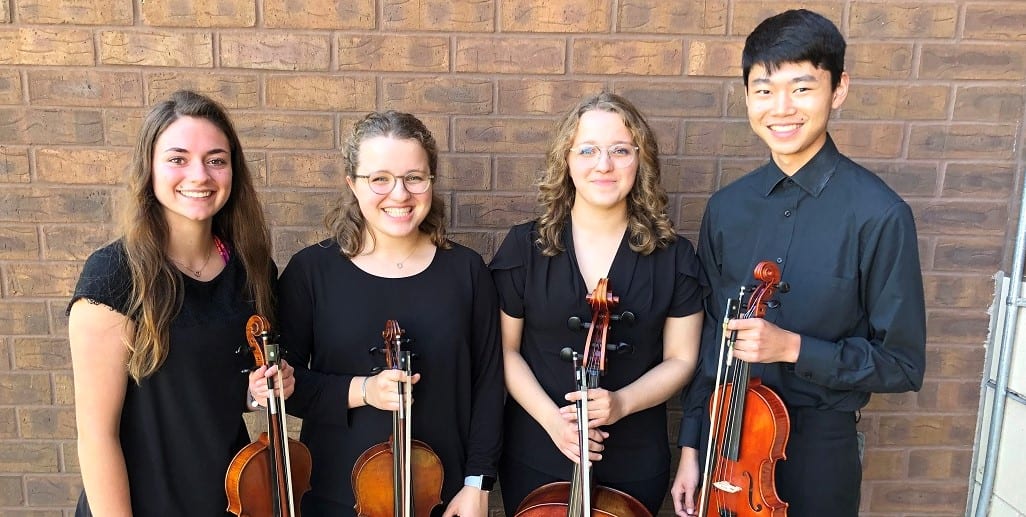 Ayu Seiya, 17, has been playing violin for eleven years. He is a member of the Elgin Youth Symphony Orchestra. Ayu is a member of the school’s cross country team, math team and participates in the Honors Societies for Math, Science, and Social Studies. The senior plans to attend college and double major in Music and a STEM field.

“I like that orchestra allows me to meet other students that have similar interests as me.”

Lasey Emmerich, 17, has been playing violin for nine years. She has participated in the Elgin Youth Symphony Orchestra for the past seven years. Lasey is a member of the school’s cross country team, Tri-M, Student Council as well as the Honors Societies for English, French, and the National Honors Society. The senior plans to attend college upon completing high school.

“I like that I get to play all the music I really like to listen to, while making a lot of friends.”

Storey Childs, 18, has been playing viola for eight years. She participates in the Elgin Youth Symphony Orchestra. Storey is a member of the Spanish National Honor Society, as well as honor societies for Music and general academic. The senior plans to attend a four year college upon high school graduation.

“I really see viola as a supporting instrument, especially in an orchestra, and that is a position I really enjoy being in.”

Trudie Childs, 18, has been playing cello for eight years. She is a member of the Midwest Young Artist Conservatory program. Trudie is the President of the school’s Music Honor Society. The senior plans to attend college to major in Cello Performance.

“I really enjoy the environment of the orchestra. I like how it can go from being so stressful to completely relaxed.”