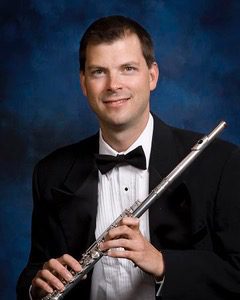 Scott Metlicka enjoys a versatile career as a performer, pedagogue, piano accompanist, and promoter of live music. He grew up in Batavia, IL and received his B. M. (performance) degree from Northern Illinois University. While at NIU, he secured a position with the Rockford Symphony Orchestra and after graduation, the Elgin Symphony. He earned a master’s degree in music from Northwestern University in 2002. Noteworthy engagements include playing bass flute at the 2014 National Flute Association Convention and piccolo, flute, alto flute and recorder for the shows Wicked and Beauty and the Beast. Mr. Metlicka has performed as soloist for Bach’s Brandenburg Concerto #5 with the Rockford Symphony Orchestra, Ibert’s Flute Concerto with the Wisconsin Philharmonic and Rockford Symphony, Liebermann’s Piccolo Concerto with the South Bend Symphony, and Dexter Morrill’s Piccolo Concerto with the Mendelssohn Chamber Orchestra (Rockford). Additional engagements include the Grant Park Symphony, Chicago Philharmonic Orchestra, Chicago Opera Theater, Joffrey Ballet Orchestra, Fulcrum Point New Music Project, Present Music Milwaukee, Madison Symphony, and Wisconsin Chamber Orchestra. During the summer, he has played with the Peninsula Music Festival in Door County, WI and the Pine Mountain Music Festival in Michigan’s Upper Peninsula. He currently is a member of the Rockford, Elgin, and South Bend Symphonies, and Milwaukee’s Skylight Theater Orchestra. He is also a proud alumnus of the Elgin Youth Symphony Orchestra.

A passionate music educator, Mr. Metlicka has a highly regarded private studio in the Chicago area, with many of his students receiving music education and flute performance degrees. He is the Flute Instructor at Northern Illinois University and Adjunct Faculty at Elgin Community College. As an advocate for live music, his chamber music group, Apollo Trio, presents recitals at local libraries and with Chamber Music on the Fox in Elgin. Mr. Metlicka is an avid bicyclist and pedals from his home in Elgin to his family’s cabin in Wisconsin’s Northwoods, where he is currently developing a chamber music series.