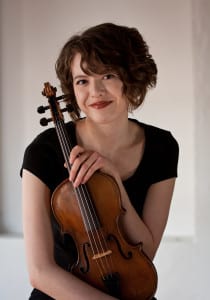 Raised in St. Charles, IL, Theresa Goh grew up playing viola in the Elgin Youth Symphony Orchestra, where she developed her artistic voice under the tutelage of Angela Wifler, Beth Wood and Artistic Director, Randal Swiggum.  Following seven years in various EYSO ensembles, Theresa was a member of the Maud Powell String Quartet for the 2009-2010 season, and as a winner of the Young Artists Concerto Competition, she performed Hindemith’s Der Schwanendreher with the Youth Symphony.

Theresa attended Lawrence University where she participated in a teacher-training program under master teacher Carrie Lane Gruselle and she served as the Artistic Director of the Lawrence Baroque Ensemble.  Her principal teachers include Matthew Michelic (Lawrence University), Li-Kuo Chang (Chicago Symphony Orchestra), and Susan Posner (Elgin Symphony Orchestra). Theresa has performed in masterclasses with artists such as Midori, Biava String Quartet, Pacifica String Quartet, Jaime Laredo, and Charlie Pickler.  As a member of the Maud Powell String Quartet, she was privileged to have coachings with Rachel Barton Pine, Brant Taylor, and Roland Vamos, among others.

Passionate about a rich liberal arts approach to music, Theresa has training in dance, literature and composition, and visual arts. She maintains a private studio and is an avid liturgical musician.  In addition to her artistic pursuits, she enjoys gluten-free, vegan baking and yoga.