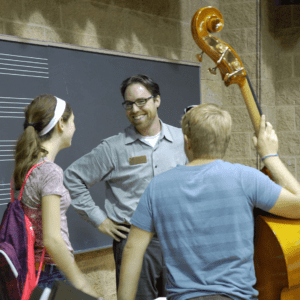 Anthony Krempa lives in the Chicago area, but hails from Southeast Michigan where he grew up. He received his bachelors in music education from Wayne State University, and has Masters degree work from both Wayne State and Vandercook College in Chicago. He taught orchestra, band and choir in Birmingham, Michigan for many years prior to his move to Chicago in 2011. He is the Associate Director of orchestra at Adlai E. Stevenson High School in Lincolnshire, Illinois and an active clinician, guest speaker and coach throughout the midwest. His recent performance credits include serving as principal second violin with the Lakeview Orchestra and the Chicago Composers Orchestra, a group who’s mission involves performing living composer’s works.

Described as “passionate and inspiring”, Tony brings a vast and varied conducting experience to the EYSO, with both professional and youth orchestras. Philharmonia conductor since 2014, Tony loves working with such a passionate and engaged group of music educators!