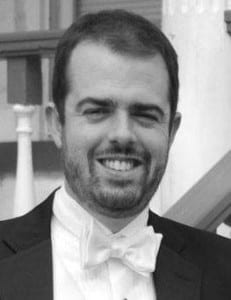 Originally from Columbus, Ohio, Andy has enjoyed a diverse and unique musical background. He began playing violin at age nine, trumpet at age ten, and completed four European tours with the Blue Lake International Youth Symphony and Columbus Symphony Youth Orchestras before finishing high school. As a chorus member, he performed in Carnegie Hall with Kinderchor. In 2000 he was selected to perform with the National Youth Honors Orchestra at Constitution Hall in Washington D.C. Andy received a BM in Music Education from the University of Cincinnati College-Conservatory of Music (CCM) with a double concentration in both violin and trumpet. At CCM, he performed with the Concert Orchestra, Philharmonia Orchestra, Jazz Lab Band, and Wind Symphony. He studied violin with Dr. Phil Baldwin, James McCullough, Constantine Kiradjieff and Anna Vaiman and trumpet with James Underwood, Alan Siebert, Rolff Holly, and Brad Goode. With his unique background, Andy is very dedicated to helping young musicians make the most of their musical journey. Andy served as orchestra director at Bell-Graham and Wasco Schools in the St. Charles Community Unit School District for many years, and has recently accepted the position of orchestra director at St. Charles North High School. He earned his Masters Degree in music education from Northwestern University in 2010. Besides teaching and making music, Andy is very passionate about cooking and gardening. He lives in North Aurora with his wife Jenny, also a violinist and orchestra director in Orland Park.