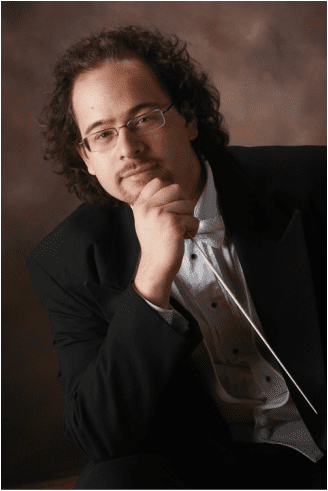 Aaron is the artistic director/conductor of the JAM Orchestra, a Chicago-based ensemble dedicated to performing a diverse repertoire of classical, Broadway, swing, and film music. He also conducts the Sinfonia Orchestra for the Elgin Youth Symphony Orchestra, the Preludio Orchestra, and Cello Choir at the Music Institute of Chicago and is the assistant director of the Chicago Suzuki Institute. A dedicated teacher, Aaron is an orchestra director at Glenbrook North and Glenbrook South High Schools where he co-teaches the orchestra classes, conducts the Glenbrook Symphony Orchestra, teaches AP Music Theory, writes orchestrations for both schools’ annual variety shows, and conducts the annual Glenbrook musical.

A passionate advocate of American musical theatre, Aaron has been the music director/conductor for over 80 productions (with complete orchestration) including West Side Story, On the Town, Les Misérables, RENT, Chess, Guys & Dolls, Fiddler on the Roof, and The Producers. He was invited to conduct the orchestra for the Illinois High School Theatre Festival All-State Production twice; in 2013 for Memphis (premiere amateur production) and in 2017 for Sweeney Todd. Aaron currently sits on the board of directors for several different theatre companies and was a co-founder and co-president of Illini Student Musicals on the University of Illinois campus.

He has continued his conducting studies at workshops in the United States and Europe with Gustav Meier and Larry Rachleff and has conducted the Bohuslav Martinu Philharmonic (Czech Republic) and the New Symphony of Bulgaria. Aaron began studying cello at the age of 5 with Holly Compton and continued with Blake Brasch, Ani Aznavoorian, and Brandon Vamos of the Pacifica Quartet.