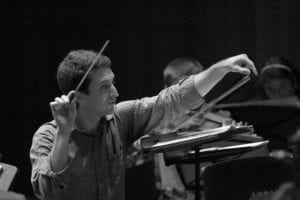 With his passionate enthusiasm for both music and education, Matthew Sheppard conducts and teaches across the Chicago area and abroad. Outside of EYSO, Sheppard is the Education Conductor for the Elgin Symphony Orchestra, Artistic Director of the Hyde Park Youth Symphony, and Music Director of the University Chamber Orchestra at the University of Chicago and the Gilbert and Sullivan Opera Company of Chicago.

In the past year, Sheppard has guest conducted orchestras in North and South America, including the Orquesta Sinfónica Nacional del Paraguay, the Champaign Urbana Symphony Orchestra, the Lake Geneva Symphony Orchestra, and the Blue Lake International Youth Symphony. Sheppard serves as a committee member for the Illinois Comprehensive Musicianship through Performance (IL CMP) project as they encourage “teaching with intention, and performing with understanding.”

Active as a guest conductor and clinician throughout Illinois and Wisconsin, Sheppard is recognized for his inspiring teaching, musicianship, and leadership both on and off the podium. Previously, he served as Music Director of the Sangamon Valley Youth Symphony (now the Illinois Symphony Youth Symphony), Orchestra Director at Juniata College, and Assistant Conductor of the Central Pennsylvania Youth Orchestra. In 2010, he founded the State College Summer Orchestra, a community orchestra that presented twice-annual benefit concerts. In 2013, they presented four world premieres, including a commission by Efraín Amaya for the orchestra and cello soloist Kim Cook.

Sheppard studied with Donald Schleicher as a doctoral candidate in orchestral conducting at the University of Illinois, and before that earned his master’s degree in orchestral conducting under the tutelage of Gerardo Edelstein at Penn State University. He holds bachelor’s degrees in Liberal Arts, Music Education, and Violin Performance from Penn State where he studied with Max Zorin.