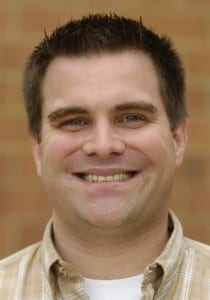 Jason Flaks begins his 21st season with the EYSO conducting the Brass Choir, which he founded in 1998, and Sinfonia, which he conducts with Associate Conductor Andy Masters. Flaks, a native of Elgin, began playing trumpet at age ten and has been involved with youth orchestras since his high school days as a trumpet player in various area youth orchestras. In high school and college, Flaks toured the U.S. and Europe with ensembles ranging in musical style from classical to punk rock and ska. He received his Bachelor’s Degree in music education from the University of Wisconsin-Madison and earned his Master’s Degree in music education at Northwestern University in the summer of 2003. Flaks serves as Director of Bands at both Geneva Middle Schools and performs throughout the Chicago area as a freelance trumpet player. His previous teachers have included John Aley, Bruce Daugherty, William Scarlett, and James Thompson. Flaks received the 2013 Distinguished Music Educator Award from the Yale School of Music.