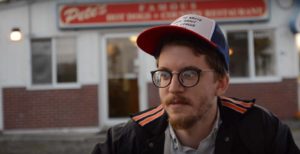 Ethan T. Parcell is an artist and educator born and raised in Geneva, IL and currently working in Chicago. He principally works in the fields of composition (especially for young musicians), performance (principally spoken), writing (mostly to sing later) and visual art (largely handwritten).

His compositions have been performed throughout the US and Canada by Boston Musica Viva, Ludovico Ensemble, and various others. Starting in 2016, he became the EYSO’s first ever composer-in-residence, where he has composed and premiered new works with each one of the organization’s large ensembles as well as all four Honors Chamber Ensembles. He received his BM in Composition from the Boston Conservatory under Andy Vores, Curtis Hughes, and Jan Swafford.

He is an active performer in theatre and music, appearing in recent theatre works by Corey Smith and Lindsey Barlag Thornton, and leading the experimental opera ensemble Focus Group LLC. Parcell appears on over a dozen recordings as a percussionist, clarinetist, guitarist and singer, both as a collaborator and leader.

His handwriting and iterative drawings have been exhibited in the US, Malta, and Mexico.

More info can be found at www.ethantparcell.info