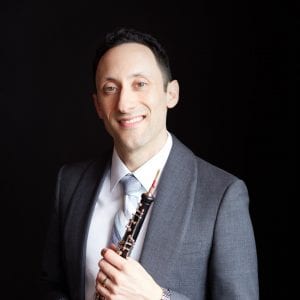 Frank Rosenwein joined The Cleveland Orchestra as principal oboe at the beginning of the 2005–06 season. He made his solo debut with the Orchestra in February 2007, in Bach’s Brandenburg Concerto No. 2. Since then he has performed many times as soloist, including playing the Richard Strauss Oboe Concerto in 2012 and the first Cleveland Orchestra performances of the Vaughan Williams Oboe Concerto in 2017.
Since 2006, Mr. Rosenwein has served as head of the oboe department at the Cleveland Institute of Music, where in 2015 he was given the Alumni Achievement award. He also teaches at the Kent Blossom Music Festival, and is in demand as a guest artist and masterclass clinician in schools all over the world. An avid chamber musician, he has spent many summers at the Marlboro Festival and has performed with the Mainly Mozart Festival in San Diego, Philadelphia Chamber Music Society, and the Seattle Chamber Music Society.
Born in Evanston, Illinois, Mr. Rosenwein holds a bachelor of music degree from the Cleveland Institute of Music, where he studied with John Mack (Cleveland Orchestra principal oboe, 1965–2001), and a master of music degree from the Juilliard School. Prior to coming to Cleveland, he served as principal oboe (2002–05) of the San Diego Symphony and San Diego Opera.
Mr. Rosenwein is married to Cleveland Orchestra associate concertmaster Jung-Min Amy Lee. They live in Cleveland Heights with their twin boys, Joshua and Julian, and their dog, Sofie.

If you are interested in participating as a student and performing on this masterclass, please print out application form below and mail to:
Elgin Symphony Orchestra
Attn: Frank Rosenwein Masterclass
20 DuPage Ct.
Elgin, IL 60120