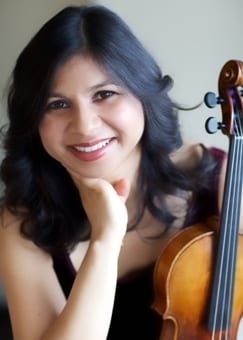 Adele Anthony was born in Singapore as the daughter of Alphonse Jivaras Anthony, the founding concertmaster of the SSO. She began to play the violin at the age of two and a half when the family settled in Tasmania. She subsequently attended Dernancourt Primary School, South Australia, and studied violin in Adelaide with Lyndall Hendrickson and Beryl Kimber. In her high school years, she attended Saint Ignatius’College Athelstone.
At age 13, in 1984, Anthony was the youngest winner of the ABC Instrumental and Vocal Competition, (now known as the ABC Symphony Australia Young Performers Awards), performing the Violin Concerto by Jean Sibelius with the Queensland Symphony Orchestra. She was later the winner of the 1996 Carl Nielsen International Violin Competition.
She subsequently studied with Dorothy DeLay at the Juilliard School in New York for eight years.
Her recordings include Philip Glass’s Violin Concerto No. 1 (1999/2000 on Naxos Records), Arvo Pärt’s Tabula Rasa with Gil Shaham, Neeme Järvi and the Gothenburg Symphony Orchestra (on Deutsche Grammophon) and Ross Edwards’ Concerto for Violin and Orchestra, Maninyas / Sibelius’s Violin Concerto in D minor with the Adelaide Symphony Orchestra conducted by Arvo Volmer (Canary Classics CC09).
She is married to violinist Gil Shaham. They have three children.

If you are interested in participating as a student and performing on this masterclass, please print out application form below and mail to:
Elgin Symphony Orchestra
Attn: Adele Anthony Masterclass
20 DuPage Ct.
Elgin, IL 60120

Applications are due October 14.