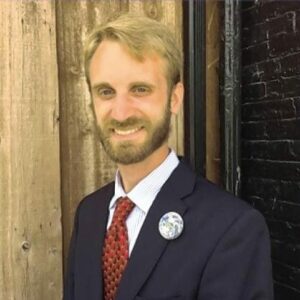 Michael Kasper has been a music educator at Carpentersville Middle School since 2009.  During his eleven years at CMS, the band program has grown from 80 students to over 200.  Working with jazz educator oracle Mark Bettcher, Michael has grown the CMS Jazz Program from non-existent to a treasure of the school.  The jazz ensembles perform regularly throughout the District 300 community and around the Chicagoland area. In 2017, the CMS 8th Grade Band was selected to perform for a demonstration clinic at the Illinois Music Educators Conference.  The performance included a newly commissioned piece titled “The Dawnland,” written by Joni Greene. Throughout the composition process, the students of the CMS 8th Grade Band were connected with Ms. Greene, allowing their ideas to be integrated throughout the composition.

Mr. Kasper was the named the 2018 Elgin Youth Symphony Educator of the Year and was a Quarterfinalist for the 2020 Grammy Music Educator of the Year award.  In 2017, he was nominated for the District 300 Teacher of the Year and has been named to the D300 Blue Ribbon Society twice. In addition to being a member of the National Association for Music Education and the Illinois Music Educators Association, Michael is part of the Illinois Comprehensive Musicianship through Performance Committee where he currently serves as President-Elect.  In 2018, Michael was a Visiting Lecturer at Northern Illinois University for an undergraduate middle school methods class. Mr. Kasper regularly provides professional development across the State of Illinois regarding equal access to music education. Michael attended the University of Illinois at Urbana-Champaign for his undergraduate degree in Music Education and holds a Master’s in Educational Administration from Northern Illinois University.